The Base Unions in Italy

The term “base unions” (or occasionally “rank and file unions”) includes many organizations with very different structures. It includes all those conflicting unions presenting themselves as alternatives to the major union confederations (CGIL, CISL and UIL), although not all are formed solely of rank and file members, with no full-time officials.

Base trade unionism in Italy is an extremely complex and varied world, reflecting both the Italian left’s great political liveliness as well as its fragmentation. Its historic roots lie deep in the experience of the 1969-70 Hot Autumn (autunno caldo) when huge masses of workers started participating democratically and with extreme radicalism against the decisions of the big unions. During that period of very hard struggle, the mainstream unions found themselves pushed by the pressure of the workers into fighting some fundamental battles, which led in the second half of the 20th century to an improvement in the standard of living for most of the Italian working population.

During those struggles, the workers organized themselves into consigli di fabbrica (factory councils). These were democratic bodies made up of representatives elected by all workers in single sections or factory departments, regardless of their union membership. The factory councils were then recognized by the mainstream unions as their base bodies and became the transmission belt between the workers, determined to decide themselves the orientation of the unions’ structures, and the unions’ structures themselves. The factory council period was closely linked to the period of the CGIL, CISL and UIL Federation, an attempt to unify the three major Italian unions, born on the wave of the Hot Autumn struggles and which foundered during the 1980s. However, it was in 1978, with the “turning point of Eur” (svolta dell’Eur), that the factory councils, as well as the commitment to a strategy based on collective struggle, were sidelined by the unions. 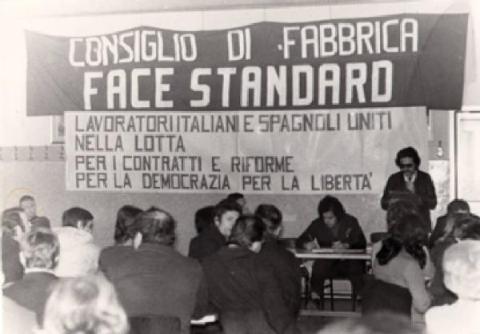 Although factory councils were strongly criticized by groups from the extra-parliamentary left (which accused them of being an attempt to bridle the workers’ activism), workers very much wanted them to exist and took part in them. Following this path, base trade unionism began to develop, as autonomous organizational organisms opposed to the major unions and as a place where those who had left the main unions encountered political militants with their experience of the revolutionary left.

As we’ve already said, the world of Italian base unionism is intricate with many organizations, some structured and some more fluid. Here, we attempt an overview of the situation as things stand in May 2013.

Confederazione Cobas (as well as some other base unions, see below) take their name from the comitati di base (base committees) born during the 1980s. The union itself was formed as part of a process starting in 1987 in the wake of a major school strike, with the push coming largely from school workers, followed shortly after by workers in the rail industry. Committees then spread to all sectors, organizing themselves into networks and eventually formalizing themselves into the Confederazione dei Comitati di Base (aka Confederazione Cobas) in 1999.

Confederazione Cobas is an important organization especially in the education sector and the wider public sector, particularly in Rome. 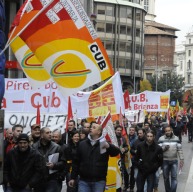 The CUB (Confederazione Unitaria di Base, the Unitary Base Confederation, not to be confused with the unitary base committees mentioned above) is a confederation of base unions set up in 1992, with a regular national structure including full-time organisers, employees and so on. It also provides many services such as tax, social security and legal advice for workers, consumers and migrants.

At present, it is thought to be the biggest base union organization in Italy, with around 500,000 members. It’s active in many sectors, such as construction, transport, media/culture and some industrial sectors though it is strongest in the public sector. It has also called strikes over explicitly “political matters” such as the wars in Iraq and the Balkans as well as in support of the No Tav struggle in Piedmont.

The USB (Unione Sindacale di Base) is a union born in 2010 from a merger between a number of different base unions, some from the CUB. The USB also has a regular national structure with some full-time staff and around 250,000 members. It’s especially active in the public sector and in some particular important struggles, such as the struggle for the right to housing (through the tenants’ union ASIA USB) and for migrants’ rights.

It also gives great importance to the provision of services such as legal advice and migrant support drop-ins.

The USI-AIT (Unione Sindacale Italiana) is a much smaller union, inspired explicitly by the principles of anarcho-syndicalism. It has sections in many cities across Italy, particularly in Emilia Romagna, Tuscany and Milan as well as in the healthcare industry. In Milan in particular, it is strong in two large hospitals, San Raffaele and San Paolo, both of which are in big financial trouble and have seen fierce struggle in recent years. At San Raffaele, along with USB, it played a major part in the recent struggle against cuts.

It is also involved in the Flores Magon Libertarian Project, providing medical support and solidarity for Zapatista communities in Chiapas, Mexico.

SLAI Cobas (Sindacato Lavoratori Autorganizzati-Cobas) was set up in 1994 mostly by former CGIL members, many of whom had had their primary political experiences in the autonomous factory struggles of the 1970s. Today it still has bases in some major factories of heavy industry, such as Alfa Romeo in Arese (near Milan) and Fiat Pomigliano (near Naples) as well as having a good presence in Lombardy more generally.

Slai Cobas has also in the past supported members from the union taking part in the Communist Refoundation Party candidates’ list.

Formed by workers leaving Slai Cobas inthe mid to late-1990s, SI Cobas (Sindacato Intercategoriale Cobas) is at present mostly active in the logistics industry, where it is currently carrying out a fierce struggle over wages and conditions. It is the only base union where the presence of migrant workers is undoubtedly larger than that of Italians and, probably as a result, the average age of its members is notably lower.

15 Responses to The Base Unions in Italy