[en] Logistic worker killed while on strike in Piacenza 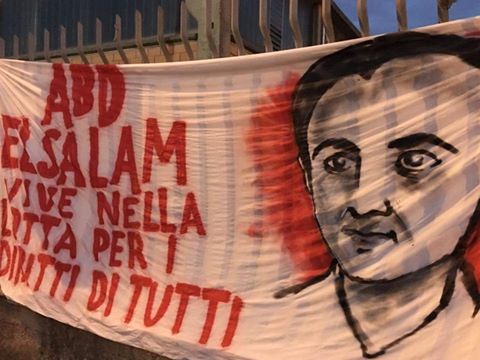 During the night between September 14 and 15, Abdelssalam Eldanf was killed while he was on strike with other workers in front of the GLS logistic plant in Piacenza. He was crushed by a truck that was trying to force the picket line. According to the workers, the truck driver was ordered to break the picket line by the Chief of Staff at the plant.

A strike had been called against the company contracted to run the plant, the SEAM. The company had fired 37 temporary workers, as well as a group of workers organized with the USB base union, who were actively leading struggles on the workplace. SEAM had previously agreed to re-hire 13 of the workers, but it suddenly rejected the agreement. Therefore, the workers immediately went on strike and blocked the exit of trucks from the plant.

The workers testify that they heard the Chief of Staff shouting at the truck driver “Go, go!” and the driver initially refusing; then, after the Chief’s insistent order, he started driving in a narrow road in the wrong direction, at high speed. Eldanf was hit, together with other two workers, one of them injured. The police was guarding the protest, but didn’t do anything.

Eldanf – 53 years old, father of five – was born in Egypt, where he was a teacher. He had been working in the GLS plant for 14 years. He wasn’t one of the fired workers, he had a permanent contract and was also waiting for his Italian citizenship. He was there in solidarity with his comrades.

The Piacenza Prosecutor’s office established that his death was a car accident, since they deny that there was any strike or protest taking place at that moment, although police was on site to manage “public order”. The truck driver is not under arrest, nor, obviously, is the Chief of Staff who ordered to crush the picket.

Many demonstrations took place in Italy during the day to mourn the loss of Eldanf. The protesters occupied the railway in Piacenza, while in Bologna a rally was attacked by the police while they were trying to get inside the train station. Other demonstrations took place in Pavia, in Naples and in other cities. The GLS plant in Piacenza in still blocked. The FIOM union declared a solidarity strike at the Ferrari plant.

Logistics is a sector that has constantly experienced strong struggles in the past years, which were always repressed with extreme violence both by police and by the companies themselves. This is especially relevant to the area around Piacenza, which has experienced such episodes in the past. The trucks have been constantly used as a weapon against pickets, causing many injuries. Many had remarked that the first victim of this killer practice was just a matter of time.

We, as Struggles in Italy, would like to express our condolences and offer our solidarity to the family and comrades of Abdelssalam Eldanf.

We strive to give an international echo to Italian social movements and to promote information and awareness in languages other than Italian. Twitter: @StrugglesItaly Facebook: Struggles In Italy
View all posts by Struggles in Italy →
This entry was posted in Labour, Migrant struggles, Repression, Unions, [en] and tagged base unions, logistics, Piacenza, strike, USB, workers. Bookmark the permalink.