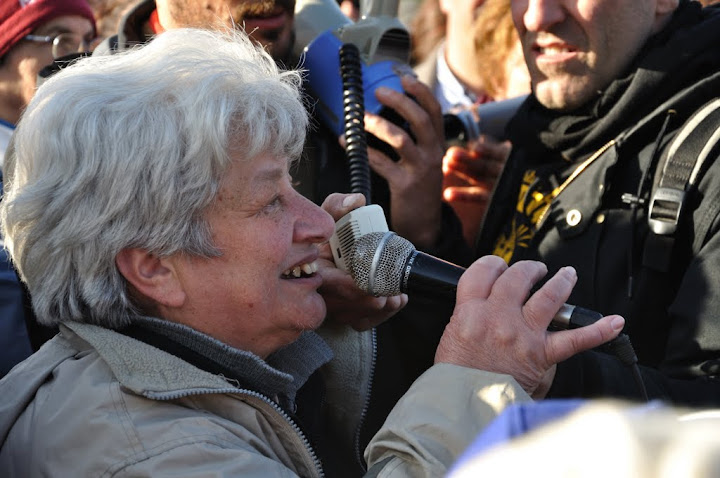 is 67 years old, to walk she needs the help of a crutch, her hands tremble, but on 11 April she succeeded in fooling about 400 policeman who were patrolling the yet-to-come-building-site for the Torino-Lyon TAV. She was allowed to access the restricted area because she owns one of the piece of land that are going to be expropriated. During the recognition she managed to handcuff herself to the fences, blocking for about 3 hours the expropriation procedure.

Around the same fences some hundreds people resisted to policeman trying to push them away from the point where Marisa was. Meanwhile 3 activists succeeded in cutting and sneak inside the fences, but they were quickly blocked and identified. Now they risk a 1 to 5 year sentence, since the zone is declared of ‘strategic interest’.
This episode happened around 13 p.m., after Notav demonstrators stood outside the fences, in a forbidden area, for more than 4 hours, to show their opposition to the attempt to give a legal appearance to the operation carried on by LTF (the General Contractor for the Torino-Lyon) and police forces since 29 February. This attempt failed because the same ‘recovery’ procedure is not in keeping with laws, since LTF technicians couldn’t identify many of the borders of the pieces of land. Furthermore Notav frontman Alberto Perino, attending as Luca Abbà (the protester injured on 29 February, who is still in the hospital)delegate wasn’t authorized to access the piece of land owned by the person he represented. In the same time Maurizio Bufalini, director of constructions for LTF, declared to the national television that the tunnel to be built will be a safety exit for the railway, but the expropriation was notified as ‘temporary’. This April 11th shows how Italian Government doesn’t obey to Italian laws.
Notav protest have not only been in Chiomonte, also many other cities in Italy. In Bussoleno, about 10 km from Chiomonte, in the morning students occupied the highway and kept it closed until the day after. In Palermo a demonstration tried to access to the railway station and was heavily charged by police forces. Other Notav demonstrations took place in Torino, Milano, Genova, Roma and over 50 Italian cities.
Meanwhile the fascist party Forza Nuova is trying to gain credibility as a part of Notav movement publishing the recording of a phone call with Alberto Perino. It’s not yet clear authenticity, but the fascist movement uses the supposed link with the movement as an evidence of its autarchic social activism. In the call Perino doesn’t say anything compromising and already last month Perino, answering to similar accusations, published a video which strongly states that the Notav movement is explicitly anti-fascist. Unfortunately some newspapers, including ‘La Stampa’ do not consider it an explicit answer, selling off the situation as controversial.

We strive to give an international echo to Italian social movements and to promote information and awareness in languages other than Italian. Twitter: @StrugglesItaly Facebook: Struggles In Italy
View all posts by Struggles in Italy →
This entry was posted in Environment, Grassroots movements and tagged Chiomonte, espropri, ForzaNuova, notav, Palermo. Bookmark the permalink.