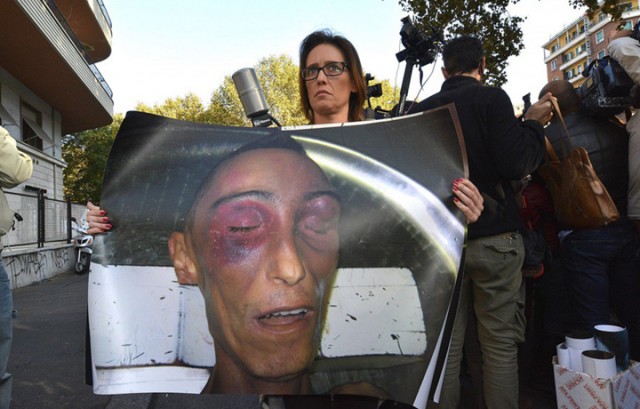 Italian newspapers, media and people on social media have started talking about Stefano Cucchi’s death again. That’s because the results of a legal report about the causes of his death were published on 4th October, suggesting that he died because of epilepsy.

Stefano Cucchi was arrested on a drugs charge during October 2009 and died in hospital after a week of detention. He was severely undernourished, covered in bruises and had multiple fractures and injuries to his internal organs. The circumstances of his death polarized the public: those who accused the police of brutality and those who defended them. Carlo Giovanardi, a member of the former Berlusconi Government, claimed that Stefano had died because he fell down the stairs, and also because he was a drug addict.

During the first trials, a total of 12 people were accused of his death: three nurses, six doctors and three police prison officers. On 5th June 2015, the trial came to an end. Only the doctors were sentenced, with a maximum term of two years. The nurses and the police officers were found not guilty, because Stefano had died of malnutrition and dehydration as a result of the doctors’ lack of intervention. No-one was found guilty of the bruises, fractures and other injuries found on Stefano’s body.

In December 2015, a new inquiry began, with the objective of demonstrating that five police officers beat Stefano and then tried to impede the investigations. The inquiry also demanded a new legal report. The results reported that there were two possible causes for Stefano Cucchi’s death: either it was “sudden and unexpected, caused by epilepsy” or it was as a direct consequence of the beatings. Neither of these causes was decisively proven in the legal report but the consultant chose to comment, without explaining why, that the likelihood of the first is “extremely strong and reliable”.

The results and the consultant’s comments have sparked new waves of rage and contempt both against and in favour of the police. Stefano’s sister, Ilaria, who has been following and reporting the trials and the investigations, has attacked the report’s results and the consultant’s remarks. But she has also stressed that, finally, a trial for involuntary manslaughter will be held because the report acknowledged the spine fractures and other injuries caused by the beatings.

We strive to give an international echo to Italian social movements and to promote information and awareness in languages other than Italian. Twitter: @StrugglesItaly Facebook: Struggles In Italy
View all posts by Struggles in Italy →
This entry was posted in Repression, [en] and tagged police, prisons, Stefano Cucchi, violence. Bookmark the permalink.