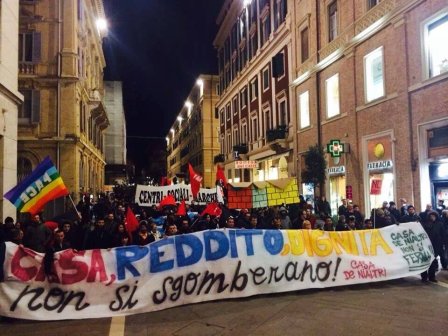 On 5 February 2014 Ancona’s centre-left city council evicted refugees and homeless people from the Casa de Nialtri housing occupation. The Casa was a former infant school (disused for three years) which had been occupied on 22 December by people from a large network of grassroots groups and associations, together with a number of Italian and migrant homeless people. The Casa – the first housing occupation in Ancona for more than two decades – provided a home to around 60 people.

Most of the migrants involved had been trying to get assistance from the social services over the past few months but nothing useful had been forthcoming. For North African migrants, the situation had become much worse after the end of the Emergenza Nordafrica Project (the controversial programme put together by Italian authorities to assist North African refugees). In Ancona, the end of this programme meant that a large number of refugees were abandoned in February 2013, with no income, no accommodation and only able to stay in the public dormitory (which has just 30 places) for a limited number of nights in the year. The Casa, by contrast, was supported by most of the neighbourhood’s residents, some of whom brought food and clothes to the occupiers.

Occupiers and activists saw the occupation as an experiment in facing increasing poverty, nowadays also experienced in the relatively wealthy Marche Region where Ancona is situated. The Unione Inquilini’s Carlo Cardelli has said that currently, ‘out of 1300 applications for public housing, only 100 will be successful,’ adding that more than 100 eviction order are served every year in Ancona. One of the occupation’s overt aims was to develop the potential of co-housing in facing economic dispossession.

The centre-left Democratic Party, currently in control in the city of Ancona, opposed the occupation from the very beginning. Using an argument typical of Democratic Party politicians in these situations, Ancona’s mayor Valeria Mancinelli stated that the occupation was illegal and would only result in harming other vulnerable groups. The Democratic Party was unable to offer a solid alternative, putting forward just six months of temporary accommodation for the homeless in other facilities as a solution. It refused to consider turning the former infant school into public housing, saying that it had already been decided to turn it into a centre for disabled people.

A few days later, SEL (a centre-left party), the Five Star Movement and Ancona Bene Comune (a civic group) together issued a public statement that no formal documents concerning the use of the former infant school existed. The Democratic Party was openly lying. The M5S and SEL were the only two political parties who consistently supported the Casa de Nialtri.

Despite Casa de Nialtri having a great deal of support from neighbours and other citizens, urban movements and institutions, the mayor Valeria Mancinelli took the decision that the occupiers should be evicted. The eviction took place at 6.30am and involved around 100 police officers (an extraordinarily high number when compared with the number of occupiers). Many observed that such a large deployment of officers was probably to intimidate. People were temporarily taken to a homeless shelter; those who refused to go were taken to the police station and charged.

The housing movement reacted by staging a demonstration on 15 February, supported by left-wing groups, grassroots Catholic associations, SEL and M5S. Around 1,000 people demonstrated, showing the large support of local civil society. The housing movement is continuing to picket when eviction orders are served on families living in social housing but at the moment no new occupation has been officially declared.

[en] The Right to Education: Eviction and Clashes in Torino

We strive to give an international echo to Italian social movements and to promote information and awareness in languages other than Italian. Twitter: @StrugglesItaly Facebook: Struggles In Italy
View all posts by Struggles in Italy →
This entry was posted in Activism, Migrant struggles, Repression, [en] and tagged affordable housing, Ancona, Casa de Nialtri, evictions, migrants, north africa, occupation. Bookmark the permalink.