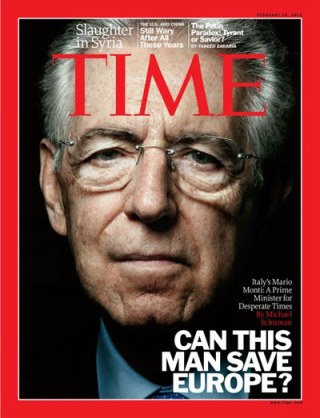 A vote against austerity?

Let’s face the truth: Italy is a place where you can do whatever disgusting thing you like (including sexually exploiting teenagers) and still be the first choice for one in three voters. Yet, many of the analyses from abroad (including The Economist’s condescending cover of March 2) fail to acknowledge the complexity behind the Italian vote, depicting the Italians as a childish people, ready to follow one Pied Piper after another.

One of the biggest surprises of the Italian elections was the defeat of Mario Monti, the outgoing Prime Minister. His slate “Civic Choice” scored far below the generous estimates which had been circulating in the foreign press (15% according to The Economist), and failed to become the deciding element in a divided Parliament. Monti dragged his supporters down in his fall. While Berlusconi’s PDL was opportunistically ready, withdrawing its support of the technocratic cabinet on December 4, 2012, the Democratic Party supported the coalition until the very end, binding itself to the much-hated fetish of austerity. Even though tensions continued to mount between Pierlugi Bersani (the Secretary of the PD) and Mario Monti, rumors of a possible post-electoral alliance between them kept circulating, badly affecting the credibility of the Democratic Party and of its more radical ally, Nichi Vendola’s SEL (Left Ecology and Freedom).

In a recent article published by Il Manifesto, Donatella Della Porta, an Italian sociologist of movements, has related the success of the M5S to the rejection of austerity. As Della Porta claims, Monti is the politician who experienced the greatest “defeat,” while his temporary allies PD and PDL, respectively losing one third and half of their electoral support, were also penalized for supporting austerity. Even if the technocratic mask of the government – a nice euphemism for harsh neoliberalism – has inhibited the rise of a large anti-austerity movement, anti-austerity feelings did prevail in the end, largely dictating the electoral result.

The discrepancy between the national and the international perception of the Monti cabinet is particularly evident in the vote of Italians Residing Abroad (IRE). As opposed to its poor 4th place in the national election, Monti’s slate (renamed “Con Monti per l’Italia”) came second outside Italy, just behind the Democratic Party. With the significant exception of some European countries (Spain, Ireland, Norway), the M5S did not obtain overwhelming support from IRE.

The Monti list obtained percentages ranging from 28.7% (Northern and Central America) to 31.4% (Africa and Asia). It did not, however, run in the South American region, which explains its overall placement of 19.1% in the Senate, and 18.4% in the Chamber of Deputies.

IRE elected one senator from Monti’s slate, against the four from the PD ranks and one from the MAIE (a Latin American party that does not follow traditional left and wing categories but mainly focuses on the immigrant experience, and which proved to be a decisive factor in the 2006 elections). In the Lower Chamber, Mr. Monti’s slate won two deputies, as opposed to five won by the PD, two by the MAIE, and one each for the PDL and the M5S. The IRE vote was in line with international expectations, with a strong PD and Monti majority, right-wing and non-traditional parties confined to the marginal fringe, and an irrelevant radical left. Voters from abroad perhaps focused more on avoiding the collapse of the euro than on rejecting austerity measures they had not experienced first-hand.

Few voices outside Italy criticized Mr. Monti before the vote. One who did was Wolfgang Münchau, who claimed in the Financial Times, on January 20, 2013 that “Monti is not the right man to lead Italy”. The article was often republished and quoted in the Italian press, although many journalists conveniently forgot to notice that Münchau’s criticism of Berlusconi was much tamer than it could have been.
However, the failure of Mr Monti to be re-elected was generally met with disappointment and disbelief. The Economist had not hidden its support of the outgoing Italian Prime Minister, calling the Italian election a “a test of the maturity and realism of Italian voters” on December 9, 2012. A few weeks later (December 30 2012), J.H. in the same column added that “from an electoral point of view, it is perhaps unfortunate that Mr Monti will be focussing his campaign, not on his personal merits, but on an agenda that is an implicit pledge to press ahead with the very policies that so many voters reject.” Days before the vote, the New York Times described Monti’s political paradox: “Even as he has been one of the euro zone’s loudest opponents of the economic austerity long advocated by northern-tier countries like Germany, his opponents at home have attacked his domestic economic proposals as too austere.” Yet the distinction between Monti’s own merits and the policies of austerity, to quote The Economist’s column, sounds artificial at best.
Soon after election day, Tim Parks in the New York Times acknowledged the responsibilities of the Italian outgoing Prime Minister:

Foreign observers are convinced Mr. Monti did a great job and deserves re-election; this is naïve. As many Italians see it (and I agree), the professor merely bowed to pressure from Berlin, cut spending where there was least resistance and taxed everybody without regard to income.

Parks in turn adheres to the stereotype, reading the Italian vote simply in terms of pop culture and media bias, as the victory of the “entertainer” against the “pedant”.

While the seductive strategies of Berlusconi and the personal charisma of Grillo did play a decisive role in orienting the vote, the reality of Italy’s economy is that it is not merely a televised spectacle: the austerity policies promoted by Monti’s technocratic executive have taken a deep toll on an impoverished country, resulting in skyrocketing employment and loss of purchasing power. While Mr. Monti was often presented as the “savior” of the national economy, the figures show a very different reality, helping to understand how a general feeling against austerity shaped the Italian vote.

On March 1, 2013, only a week after the Italian elections, the National Bureau of Statistics (ISTAT) issued a catastrophic report on the state of the national economy. Over the past year, unemployment grew by 23%, with the total figure of unemployed now close to three million. Meanwhile, public debt reached 127% of GDP, an all-time record. Consumption decreased by 3.9% and that of individuals and the family by 4.3% In this bleak picture, taxation is the only growing factor, reaching an astonishing 44% of the GDP, the highest percentage since 1990. Increasing taxation, regardless of income levels, is the only factor leading to a slight growth in revenue (2.4%). In a system that traditionally puts the heaviest burden on the shoulders of waged employees – both in the public and private sectors – it is not hard to see that such measures are extremely unpopular.
While purchasing power has gone back to the same level as 1983 (30 years ago), ten years of economic growth have been thrown away, with national GDP reverting to the levels of the year 2000.
The job market is also in terrible shape: not only has unemployment grown, but the quality of existing jobs continues to deteriorate. The number of short-term contracts continues to grow (4%), slowly but surely replacing permanent positions. The total figure of lay-off hours has reached the appalling number of 4.2 billion in 2012 (370% compared to the 2005-2008 period); 520,000 laid-off employees have worked no hours at all.

Recession is also taking a deadly toll on business: according to Unioncamere, 365,000 closed in 2012 – that’s roughly 1000 a day. All sectors are affected, from manufacturing to traditionally stable sectors such as agriculture (down by 16,791) and construction ( down by 7,427). Looking at these figures, it is hard to say that, besides reassuring the markets, Monti really saved the national economy in 2012.

If the employment rate in the private sector is dropping, public employees (often the scapegoat of neoliberal propaganda) have also been paying a price for the policies of austerity. As one of its last deeds, Monti’s cabinet passed a Stabilization Law, imposing a wage freeze on the public sector until 2014 and postponing the negotiations of new collective agreements until 2017. Moratoria, though, do not prevent inflation and living costs from rising in the meantime. The policies of austerity have meant warfare on waged workers, public employees, casual workers and their families: the people who cast their ballots in real elections, as opposed to the impersonal entity of the market.

One thing is certain: the social butchery of austerity strengthened neither its advocates nor its opponents, the traditional left-wing forces. A third party has profited from this division, a force whose impact and duration are hard to assess at present.
This outcome was partially due to the more-than-compromising stance of the moderate left: as we saw, supporting the Monti cabinet ultimately backfired against the Democratic Party. On the other hand, the radical left was weakened (and continues to be) by its own litigiousness, sectarianism and lack of concrete solutions.
Other factors might have also played a role. On Contropiano, the small Communist online journal, a single commenter has attempted an economic explanation for this outcome: Italy is a country of mixed incomes, where people make up their income from a number of sources such as part-time employment, rent or pensions. This fragmentation could make it difficult for working class voters to identify clearly with their social class – as traditional left-wing forces do. A more cogent view is expressed by those who, like Donatella Della Porta, insist on the fragmentary nature of previous struggles. No matter how radical, the previous mobilizations never gave birth to a strong, grassroots, leftist movement on the model of Spanish indignados or US Occupy, yet they did foster an anti-austerity feeling in 2011 and 2012, which resulted in the fragmented vote of the February 24-25 general elections. While Parliament appears to be unable to form a government, one thing appears sure: unless a strong, united and clear-minded left appears, austerity policies will be deflected but not avoided, whether as the result of institutional crisis, or as the result of a diversionary political strategy.

We strive to give an international echo to Italian social movements and to promote information and awareness in languages other than Italian. Twitter: @StrugglesItaly Facebook: Struggles In Italy
View all posts by Struggles in Italy →
This entry was posted in Political parties, [en] and tagged austerity, elections, Monti. Bookmark the permalink.

1 Response to [en] Italian elections: is austerity the real loser?