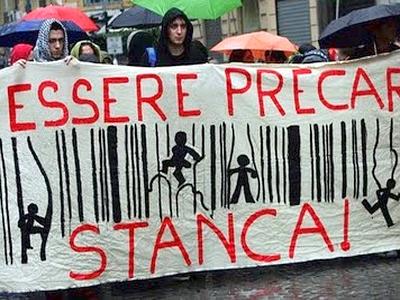 More than 3,000 students and unemployed workers demonstrated on November 12 in Fuorigrotta, a neighborhood of Naples, as a protest against Elsa Fornero, the Minister of Labour, and Francesco Profumo, the Minister of Education, who were in town to attend an intergovernmental summit on occupational policies. The rally was called by a broad spectrum of leftist forces to draw attention to the link between continuing cutbacks to education and the casualization of the job market. This is particularly severe in Naples where work in the black economy (illegal or without showing documents) is the norm.

Fornero had apparently chosen Naples as the location for a meeting with fellow ministers from Germany in order to send a strong message about unemployment and casualization. However, she was welcomed by repeated chants of ‘Why don’t you start working instead?’ The protesters also described themselves as ‘choosy’, alluding to a recent slip-of-tongue by the minister, who recently told Italian young people not to be too ‘choosy’ and to take the first available job instead of waiting for the job of their dreams. With youth unemployment above 30% and the endemic underemployment of graduates, many young people were deeply offended by this remark.

The march started from Piazza San Vitale and slowly progressed through the city centre. Police teargas and baton charges began as the protesters were marching along Viale Augusto and so getting closer to the location of the summit. At least three police officers and an unconfirmed number of protesters were injured in the clashes. Two students were arrested but released later during the day. During the teargas and baton charges many protesters sought refuge in the nearby Faculty of Engineering. After being dispersed by the police, some protesters managed to gather again, ending their action with a sit-in at the extremely central location of Piazza Municipio.

Meanwhile, a group of students has occupied the central building of the University “L’Orientale” (one of the two main Universities of Naples), as part of protests against the draconian cutbacks to education.

We strive to give an international echo to Italian social movements and to promote information and awareness in languages other than Italian. Twitter: @StrugglesItaly Facebook: Struggles In Italy
View all posts by Struggles in Italy →
This entry was posted in Education, Precarious Workers, Repression and tagged Elsa Fornero, Naples, occupy, protests, students, unemployment. Bookmark the permalink.