A strange and dramatic demonstration took place on 4 May in front of a tax office in Bologna, where a 58-year-old bricklayer burned himself to death on 28 March. Because the protest was organized by the wife of the deceased, it has been called the “widows’ march” and has mobilised around one hundred people who, bringing white flags and pictures of suicidal entrepreneurs, wanted to remember all the “tax victims”. Many of them where entrepreneurs or tradespeople who demanded more sustainable taxation and careful attention to their problems.

During the last weeks, a series of particularly tragic events, like that of the bricklayer in Bologna, have captured the media’s attention, making economic suicides – especially those of labourers and entrepreneurs – a national issue. And most of the blame does not appear to fall on the economic crisis, which brought Italy into a recession, but taxes.

When all the increases set by Monti’s government come into effect, the tax weight will probably reach a peak unheard of in the past. From gasoline, to VAT, to electricity, to the infamous IMU (a tax on houses), tax-paying citizens can expect the burden of saving Italy from default to fall on them. Unlike Greece or Ireland, where the resources have been taken mostly from a cut in wages and on the number of public workers, in Italy, for the moment, no big cuts are being forecast; instead, severe tax increases have been announced, alongside highly advertised inspection campaigns.

According to an estimate from Istat (the national statistics institute), the black economy is worth 20% of Italian GDP, and while many Italians are forcefully demanding an end to the lax attitude towards tax evaders, many others – especially labourers, entrepreneurs, shopkeepers – feel besieged by a state that is now starting to demand without giving back any help.

This leads to the increase in “two-faced” populism. Beppe Grillo’s Five Stars Movement has reached an impressive 7% support on the national scale, asking for cuts to parties’ funds and politicians’ wages, and for more force against tax evaders. On the other hand, right-wing organizations and newspapers are trying to foment discontent with the “new course” of Italian fiscal politics. The Northern League is calling for a fiscal protest and has arranged for a meeting on 25 May with all the mayors who would like to protest, especially against the IMU. With this initiative, the partially new leadership of the separatist party wants to clean up its image from the harsh scandals that hit the old leadership just few weeks ago, when the party’s treasurer was accused of stealing millions of euros for the benefit of Umberto Bossi, his powerful family and some other important members of the party. 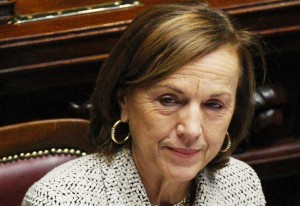 Meanwhile, the Labour Minister Elsa Fornero is moving forward with her reform, which will dismantle Article 18 of the Workers’ Statute, one of the most important achievements of the social struggles of 1969, when the Italian workers’ movement grew in previously unseen strength and decision. The Italian Workers’ Statute is considered one of the most advanced achievements in the whole Europe, and has strong symbolic, as well as practical, power. By attacking it, Monti’s government is clearly trying to dismantle also the past historical importance of workers movement.

Article 18 protects workers from dismissal, and forces the employer to rehire individuals who have been wrongfully fired. With the new reform, the “economic” reason will become a good reason, and so all that an employer will need to do is declare any economic cause for a dismissal, and it will be legal. Moreover, even if the economic reason is declared false by a judge, the return of the worker to the job will be discretionary, and the judge may also establish a mere compensation.

And with the centre-left Democratic Party mostly servile to any Monti-government initiative, even the CGIL Union finds it hard to react strongly enough.

We strive to give an international echo to Italian social movements and to promote information and awareness in languages other than Italian. Twitter: @StrugglesItaly Facebook: Struggles In Italy
View all posts by Struggles in Italy →
This entry was posted in Grassroots movements, Political parties and tagged article 18, Bologna, elections, M5S, Mario Monti, suicides, taxes. Bookmark the permalink.