The policies of austerity are already taking their toll, and “Liberazione,” the official newspaper of the Italian Communist Party (PRC, now under the wider grouping “Federazione delle Sinistre,” Left-Wing Federation), might be an early victim.

The newly formed government Monti has confirmed the retroactive cancellation of State funding to political and cooperative press, which had been promoted by the previous government. In addition to this, on December 7, 2011 a new item called for the total cancellation of such funding by the end of 2013, while ordinary press (i.e. non-political newspapers, including those run by major editorial groups and corporations) would be still indirectly subsidized. These measures have wreaked havoc to the world of small prints such as “Liberazione”: some of their dire consequences are already in effect. 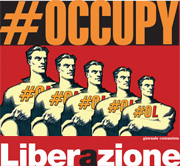 Due to the budget shrink, the publisher of Liberazione (MCR, a cooperative linked to the Communist Party itself) has announced the closing down of the press starting from December 31, 2011. Layoff and job loss is what awaits the journalists and printers currently employed at the staff office. After a tense negotiation with the publisher (with the support of the national Union of Journalists, FNSI), the editorial staff has occupied the newspaper’s office. Workers and journalists are determined to maintain the publication alive on the web, and they are calling for widespread solidarity.

Founded in 1991, “Liberazione” has represented the voice of the Italian Communists ever since. In roughly 20 years of life, the newspaper had never faced such a dire situation, says Carla Cotti of the editorial office.
“Despite the reassuring words by Mr Monti, the government has cut € 500,000 on the 2010 balance, and 2 M on the 2011 balance,” denounces Paolo Ferrero, the leader of Rifondazione Comunista. He also claims that this measure makes it impossible to obtain additional funding from banks or other sources.

“Liberazione” is not the only press affected by these measures. The budget cuts are affecting hundreds of political newspapers (including many catholic press) across the country, severely limiting the plurality and variety of the national information. Other newspapers such as “L’Unità”, “Europa,” and “Il manifesto” are also in troubled waters. due to the heavy pressure of competition from more powerful economic trades, and to the elimination of State funding. In the turn of a few months (or years), the whole Italian Left might disappear from the newsstands, should these policies be applied with unmitigated rigor.

While a mounting rhetoric depicts the affected prints as “parasitic” and “idle,” imposing the absolute validity of “free trade” criteria also for the market of information, one might legitimately question the consistence of such these beliefes in a heavily monopolized, and often controlled-from-above media landscape such as that of Italy. What is at stake is, indeed, the right to information and pluralism, including the right to existence of politically oriented information and the bio-diversity of the Italian media.

We strive to give an international echo to Italian social movements and to promote information and awareness in languages other than Italian. Twitter: @StrugglesItaly Facebook: Struggles In Italy
View all posts by Struggles in Italy →
This entry was posted in Culture, Mainstream media and tagged liberazione, occupy. Bookmark the permalink.